Once upon a time, not a long time ago, a brand new owner of a BMW F 650 GS (twin cylinder, 800cc), turned the key on his new bike to find out that "it is really windy up here!". One could say its normal since the bike rides fast and the brains in the company's "design brigade" decided that it should be a naked bike. In total contrast to the owner who had the weird notion that the bike he bought should be able to travel him far away and to commute no matter what the weather report says. 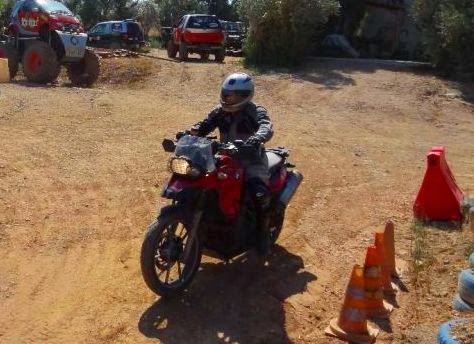 So this guy -all and all 172 centimeters tall- after getting all the joy of the airstream all over him, decided, as the winter was closing in around him, that he should have something more than a tiny piece of plexiglass that barely covers the instruments, between him and the elements. And started buying and screwing on... 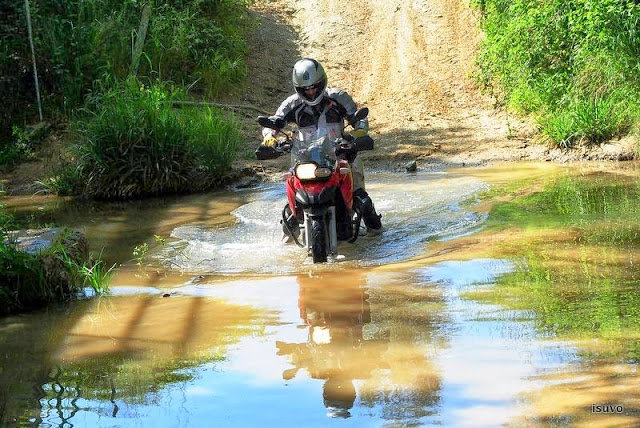 Hope dies last, as the saying goes. But hope won't be tormented first, as this guy was from the F 800 screen. The slightly larger screen did posed as more efficient and surely more "badass". in reality it was just "bad" and  by far worse that the smaller F 650 GS version. The reason is quite simple. With the small 650 "non screen" you ride in a clean evenly distributed on you aistream. No buffeting no extra noise, as every other naked bike. With the F 800 screen, all the elaborate bents, angles and stylish design manage to sent a very turbulent current of air exactly under your helmet and to your upper chest! Your hands are exposed. The wind is really noisy and straight to your throat all the time to the point you get to sound like Barry White after a while. It doesn't even protect the gps fully, so its stored to be used for "special operations".  Next...

It still is a mystery to me... How on earth a company like Bmw, with such a knowhow and tradition of building amazing touring motorcycles, with all this money and years invested in aerodynamics -the RT Pininfarina fairing being still an icon-has managed to do such a shitty work with this one.
They got to all that trouble to make a wider -down low- fairing, adding extra weight to the bike, demanding a special support bracket to bent it up to the top to achieve what? Emptying all the air it blocks right to the riders helmet visor! If he is my height. For taller guys its worse.. Calling that thing "Touring" can be understood only as a sample of peculiar German humor.


Ok, I can assume they wanted low buffeting noise right where the air pocket closes. But gently dumping it on my visor doesn't solve anything! There might be one of those crazy German TUV regulation involved that forbids the screen to go up, over a certain height... over the mirrors (?) don't know... Maybe some yuppie in the Bmw marketing  think tank-that the closest thing to a bike he ever rode was a an Indian moto rickshaw in a company's convention to Bombay- order the screen to be curved backwards so that the bike looks more "fast" or "dynamic" or "sexy", to boost sells.
I don't care, he could have stick some tits to it. Or he could give the tits as a bonus with every owners manual. The only thing this screen does is to make its buyer poorer, and by a fistfull of cash. And the only good thing for me was that I tested someone elses screen and didn't have to buy it myself. Next... 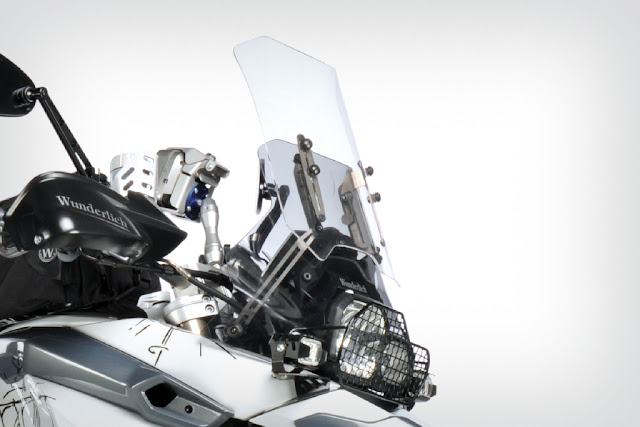 I am sure you 've heard that "assuming is the mother of all fuckups". that was the case with this one. The client sees the Wunderlich trade mark and is assuming they know their stuff. Next to it he sees a "Vario" indication, so he assumes that with a variable height he will find a position that suits him. The old "the bigger the better" philosophy is reassuring to so many people. But this is not the case.
The area of coverage from the air is as huge as the barn door screen. But isn't right. Mainly because this screen is not only huge but more vertical that it should be and has the aerodynamics of a brick wall. An expensive and very nicely finished one but still... As a result where the screen ends, the air pocket closes in violently, causing buffeting, a boom- like sound to the sides of your helmet, and turbulence.

Another problem is that it has no opening to equalize the difference in air pressure between the front and the back of the screen. The more you accelerate the more you feel as something sucks you to the front, near the screen. Off road things get worst as the hole thing is very heavy and causes the front plastic parts of the bike to move up and down when hitting pits or bumps, although the upper part is all the way down. The reason was revealed when I put the complete thing on a scale.

As it is made from lexan -for the extra durability of the lower part to hold the upper one (plexiglass won't stant it)- it weights almost 4 kilos! That is almost 4 times the weight of the Givi alternative. And that is what is causing the off road earthquakes.

Only thing that explains the Wunderlich flop came to me as I was looking at the bike and reminded me of a news stand. The proportion of it on the bike kind of left me with the impression that it was built for the 1200 GS and they simply modified the headlight cut and the bolt holes to make it fit to the F series. Off the bike and for sale it went so fast that I didn't even take oa photo of it. Next... 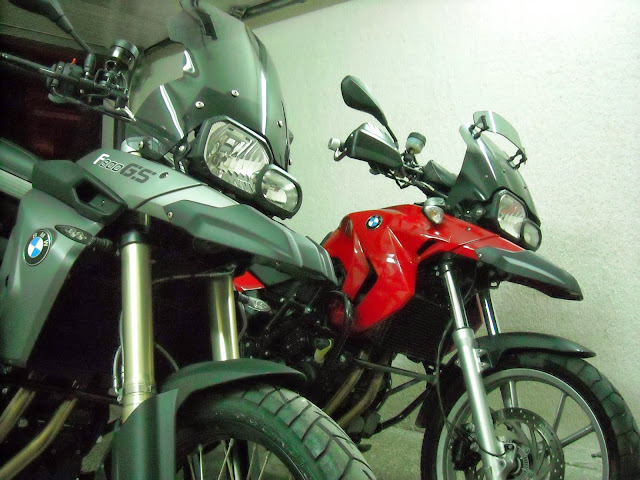 Tried it on a friend's bike. Noisy from buffeting, unstable to side winds, although it's  form and size seemed logical and the height to be at a decent level. Nice look and covered the gps set up. Friend sold it as it never worked good enough but was pretty expensive. Next... 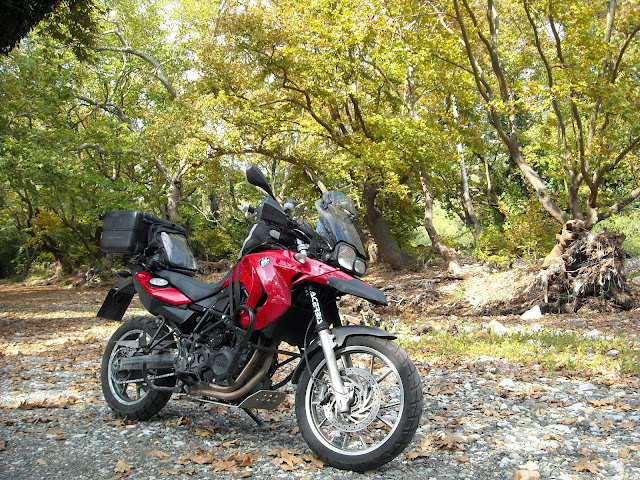 MRA's good name within the dual purpose riders community made me tried it. But most of the guys telling me to do it had japanese bikes. I paid a good 140 euros to get a screen that the dealer didn't have not even one piece to look at and was trying to sell me showing it to me on the internet! Taking about professional salesmen! My initial impression was very disappointing, as I was mid winter and with that screen I was cold even riding downtown! Then I started riding in the countryside and I understood how it was made and why. They went the opposite way of the "make it barndoor big" regime trying with the smallest possible not to block but to channel the air stream, and the upper part lift the airflow upwards to comfort you and reduce instead of block air pressure. The result is a very quiet ride from a screen is so compact that you have to be thrown off a cliff to break it.  BUT... the air that is channeled is still cold and you get cold yourself. And when it rains you get soaked. As guys with more aerodynamic expertise than mine explained, when it rains the wind has a different behavior as it is "thicker" and won't "open" as it should from the upper spoiler. And sold it was. Next... 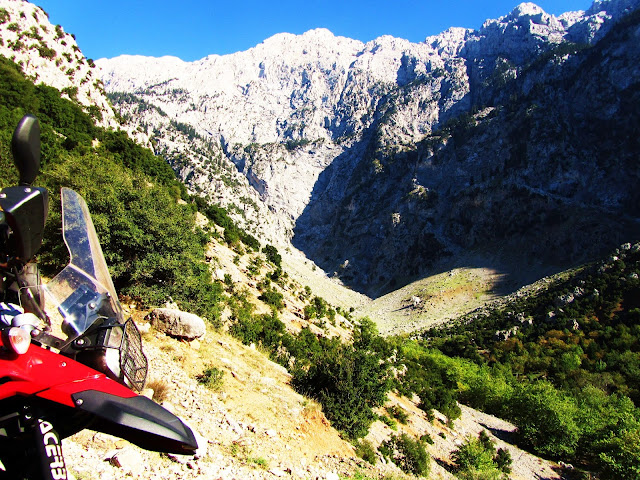 I don't know how they do it over at this company. They never make the absolute best of anything. They never make the worst. Never the cheapest. Or the priciest. But in a magical way they get to cover a big area of product lines and come up with the best cost to quality to functionality ratio. In simple words, you pay a reasonable price and you do your job. Simply. After a rainy month, with me getting soaked every day on the way to work and back, I decided the "lets try another screen on" game got old. Went to a shop, took out the screen and without even bolting it on the bike I clamped it on my old one and sat on the bike to see how tall it was on me. Bought it, bolt it on and rode home. Dry, for less than the price of a German made 10cm high spoiler add on. Then I noticed it had a sticker warning you that at a certain angle with the sun, it might work as a lens and concentrate the sun light to burn the bike's plastics. At first I laughed thinking it was some lawyer's veto to a "better safe than sorry" company policy. Then I heard that it has happened. And then I saw a bike with the burn mark on the instruments!

JESUS CHRIST ON A FARTING HARLEY BEING CHASED BY ANGRY RAΒBIS ON POLICE BMWS MAN!

This is a facepalm fail of epic proportions on motorcycle R&D! There goes the company's image and credibility buried under a sticker saying "congratulations on your new screen have many happy and safe klms blah blah, but watch in what angle you park your bike to the sun's orbit cause it might melt your speedometer". Now every time I 'll see a Givi banner on MotoGp race I 'll think of an Italian guy that explains to his son "...and that my boy is the banner of an Italian firm that makes state of the art bike parts. They even sell a wind screen so energy and environmentally efficient that not only stops wind and rain but melts the bike's plastics without any other energy source other than the sun! Just like you do to ants with your magnifying glass my little Nero. Who knows, maybe someday you get to work for them...".

Other than that the screen worked fine. Light, cheap but good quality plexiglass that send the airflow to the top of my helmet, with little noise and almost no buffeting. Wider at it's base it makes a wider airpocket just where it should, without being of barndoor size. It also has two small metal plates to bolt down and on the side to stabilize it as plexiglass is kind of a feather in the wind without support. There was a small issue with strong side winds in high speeds but no big deal.

The only problem is that at 44 centimeters high you shouldn't go off road with it. Covered with mud it would block your line of sight low on the road. And in case you got a faceplant you might get a karate chop from angry Italian plastic right to your face. Not good.

What I needed was something like this but with the upper screen part to be able to slide down a few inches when I get off road. Easily and quickly.

Soon I got across Touratech's Desierto and Britannia Composite's on the net and the answer to the problem was obvious. But prety expensive...